Please scroll to the bottom of the page to find our most recent learning!

This term, Eagles class will be learning about the legacy of William Shakespeare and studying one of his best known plays - Macbeth.  We will be exploring the story through active storytelling and learning many famous parts of the play off by heart.

We wonder if Shakespeare got his inspiration for Macbeth due to a cold as in this video:

William Shakespeare is thought to have invented lots of his own words to help him when he was writing his plays. Here is a list of words and phrases that we still use today that can be traced back to Shakespeare himself 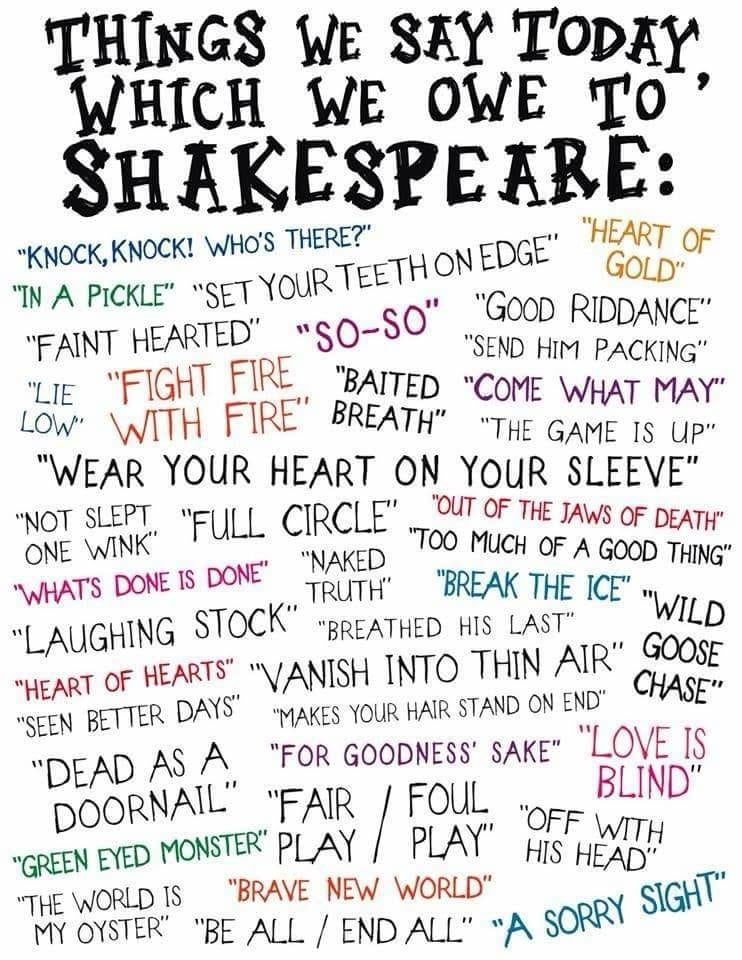 The Globe Theatre: The 'Home' of Shakespeare

The Globe Theatre was a theatre in London where Shakespeare's plays were held. It was built in 1599 by Shakespeare's company, the Lord Chamberlain's Men. Over the years, several theatres have held this name, all in central London.

The Globe could seat 3000 people and 1000 standing in the yard. It was destroyed by fire on 29 June 1613. A second Globe Theatre was built on the same site by June 1614. It was closed in June 1642, with other theatres, by order of the Puritan Long Parliament.

There are drawings of the outside of the theatre, but historians do not really know what the inside of the Globe looked like. They have had to use written descriptions, details from the building contracts, drawings of other theatres, and clues in the plays written to be performed in the Globe. In 1989 an archaeological dig at the site showed that the building was in the shape of a polygon, with 20 sides. They also discovered the building was 100 feet (30 m) in diameter.

A modern reconstruction of the Globe, named "Shakespeare's Globe", opened in 1997 about 750 feet (230 m) from the site of the original theatre. The rebuilding was a project started by an American actor, director and producer, Sam Wanamaker. He set up the Globe Theatre Trust, and spent years raising money and researching so that the theatre could be built. He died before the new Globe was finished.

Here is a 360° virtual tour of this special theatre. It has embedded links within it so please be patient if it takes a little time to load.

To start our project on William Shakespeare, Eagles class have been exploring the Globe Theatre; one of the most famous theatres in the world. To start our research, we constructed our own models in our Design Technology lessons. It was quite challenging as we had to build each net, join all of the tabs correctly - it was definitely a two-man job!

Once our models are finished, we can't wait to find out more about this famous building and to begin to think about what it must have been like to watch a play on stage. We have heard that if you were standing in front of the stage you were called a Penny Stinkard!

To find out more about the Globe Theatre click on the picture below to watch a video all about the famous london landmark! 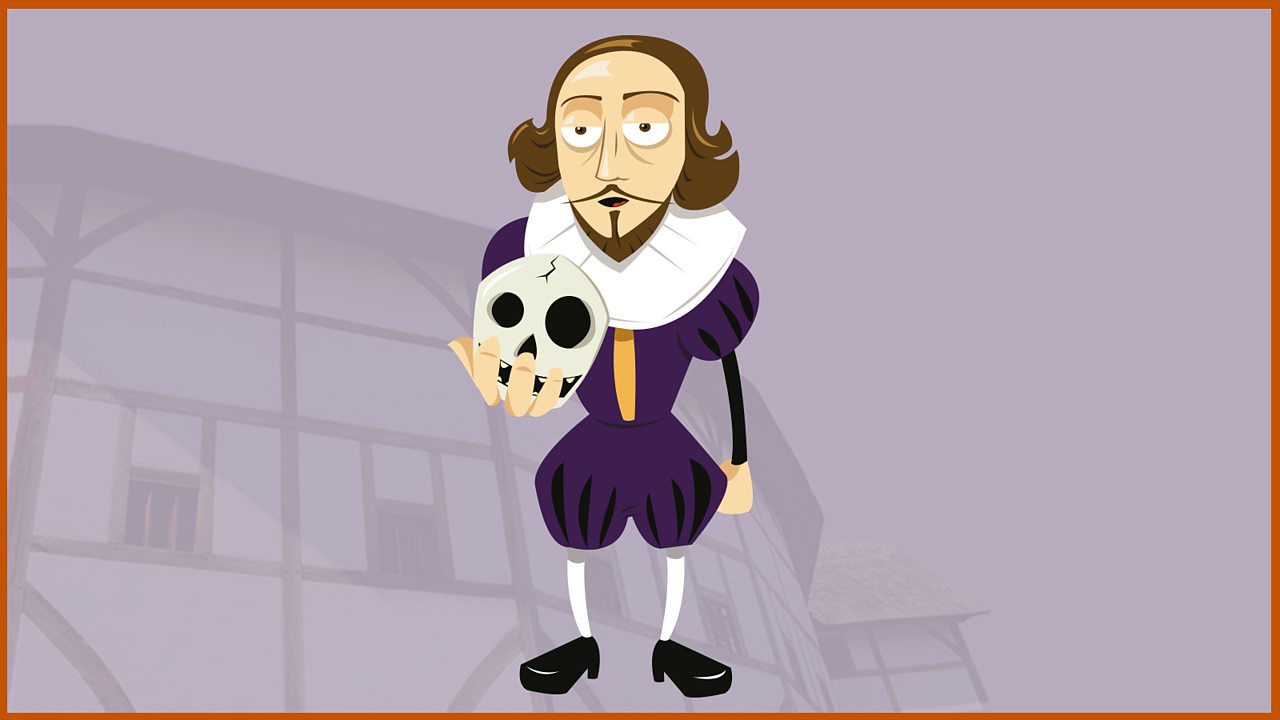 We also had a bit of fun imagining what it would have been like on the stage at the globe. Through the magic of a green screen, we got as close as we could to the real thing! 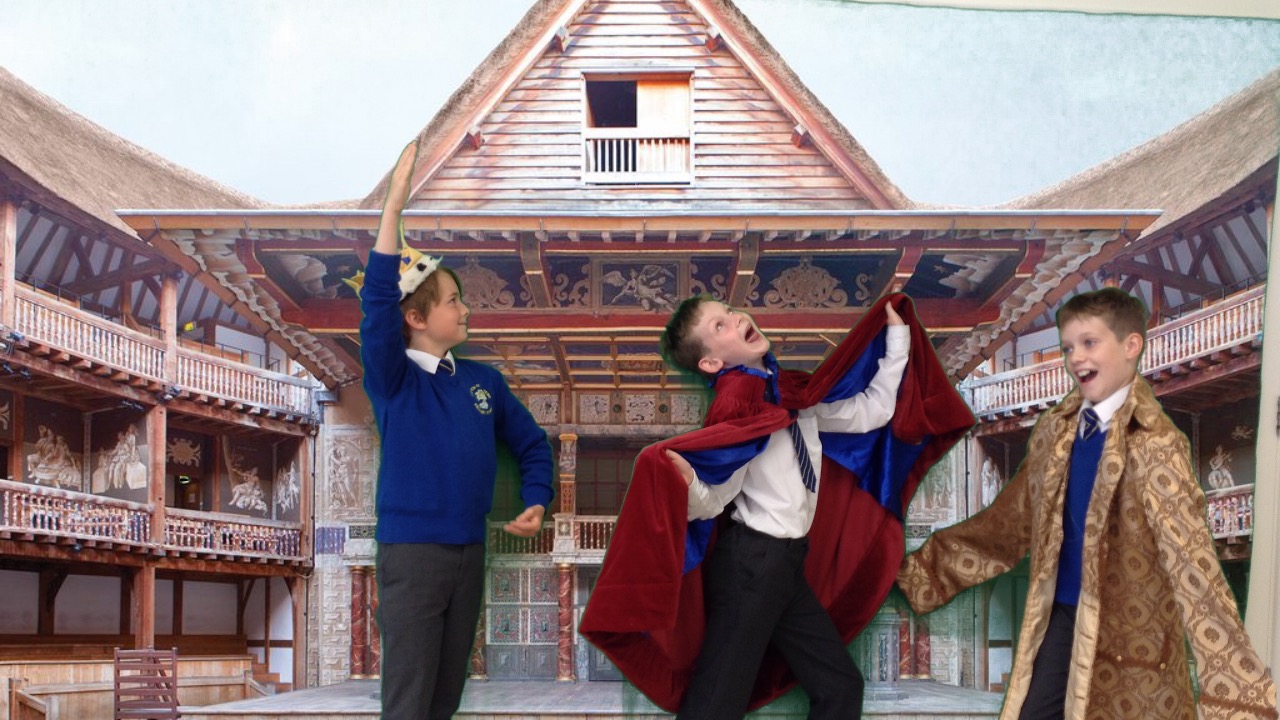 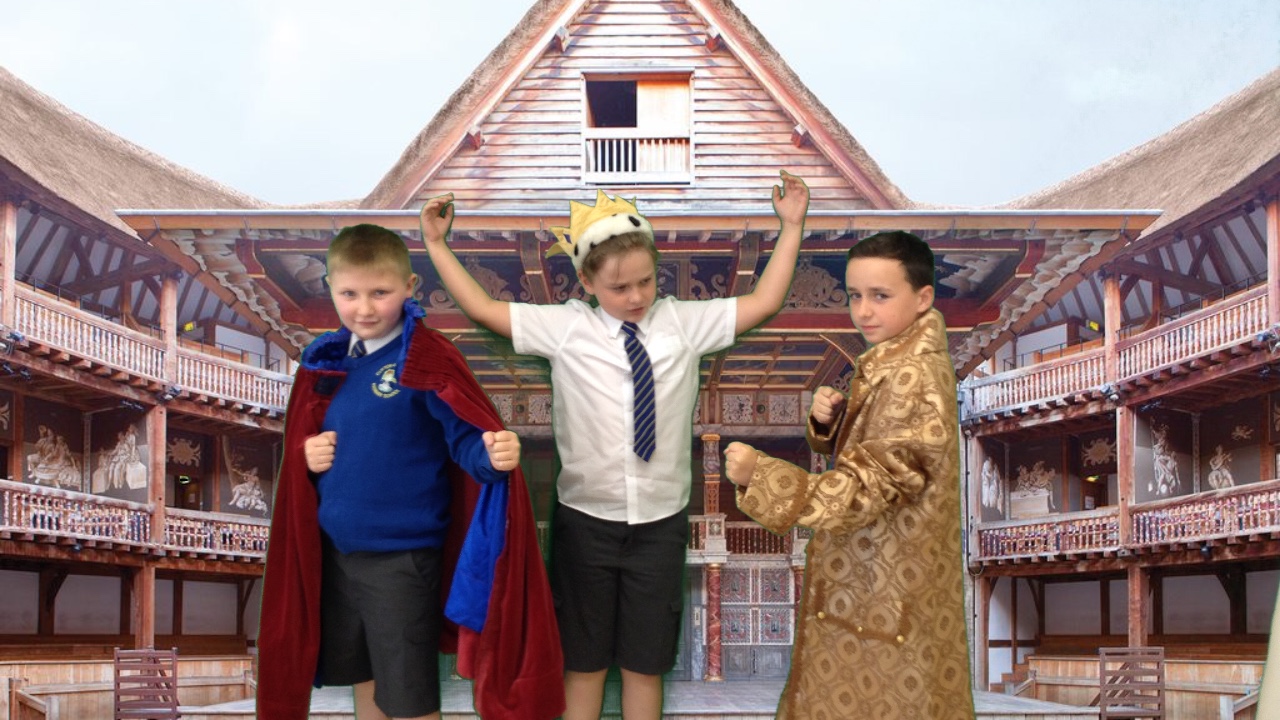 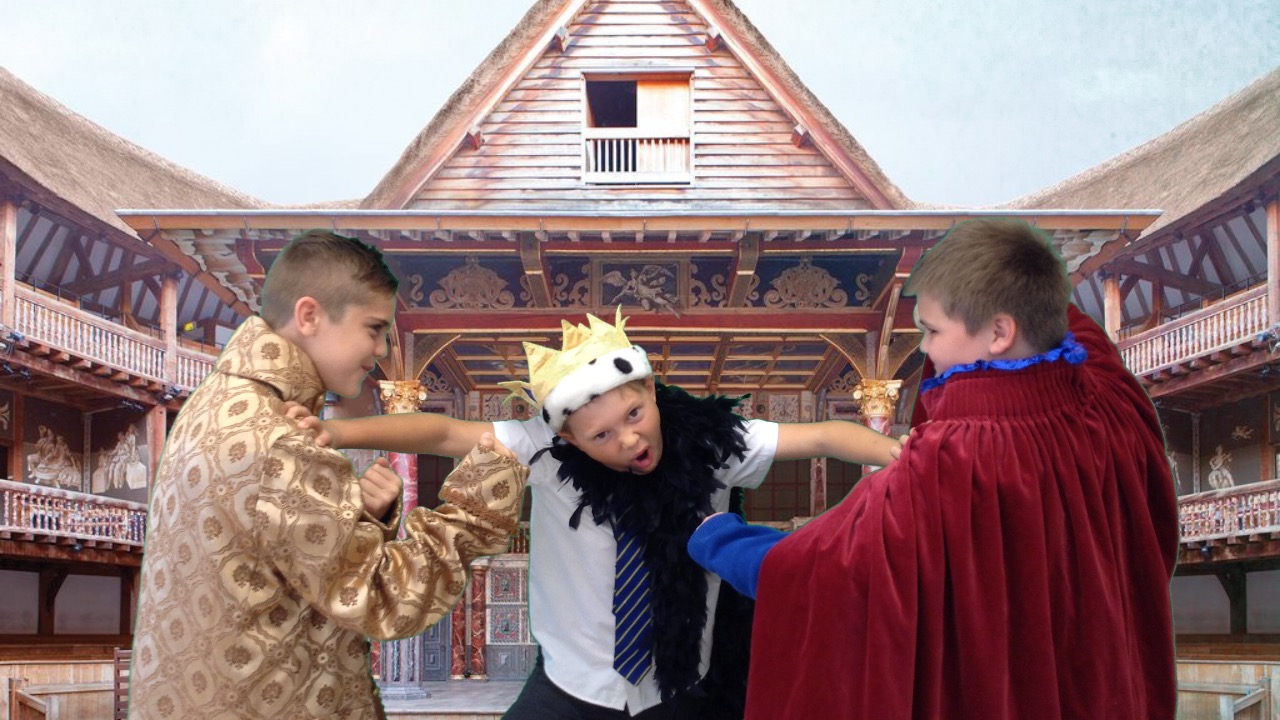 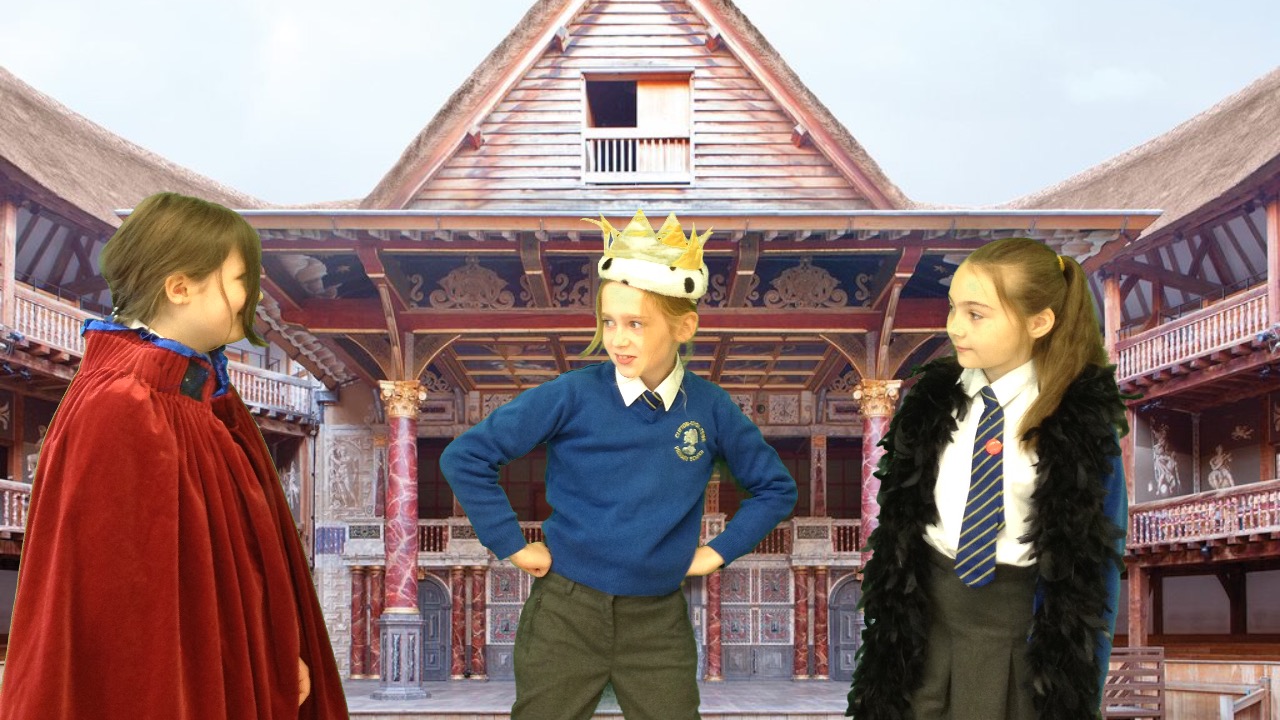 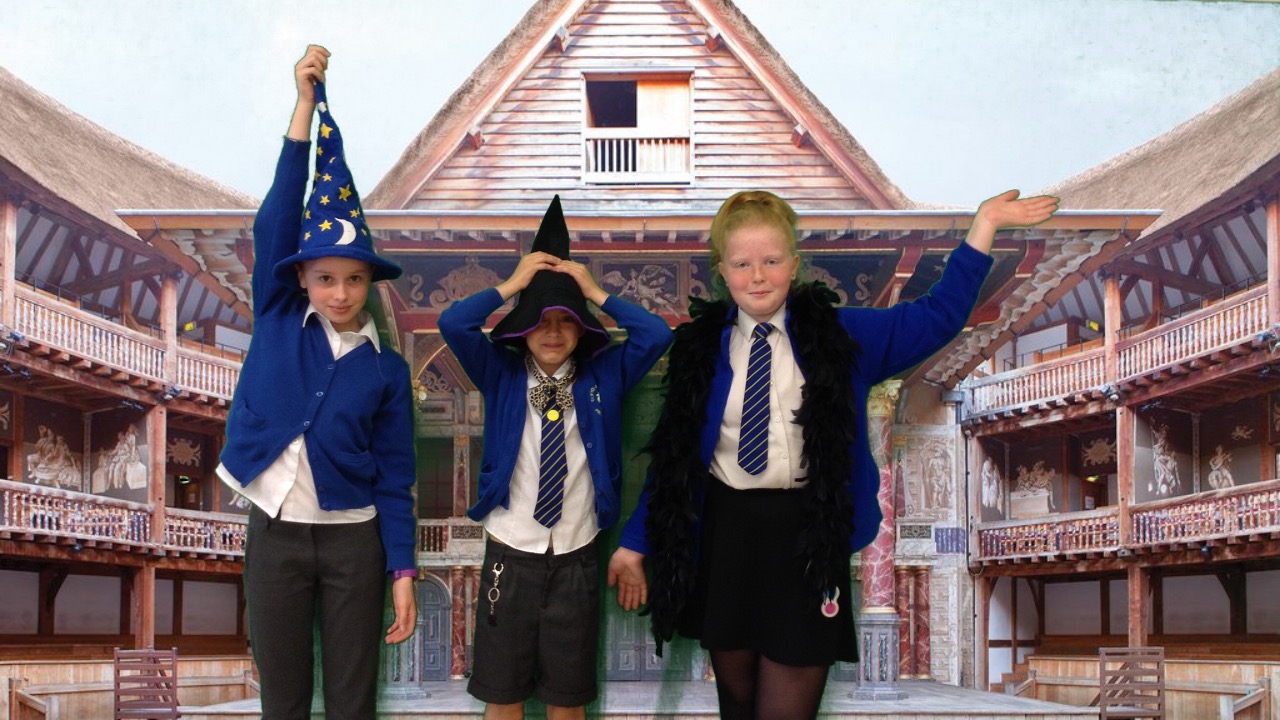 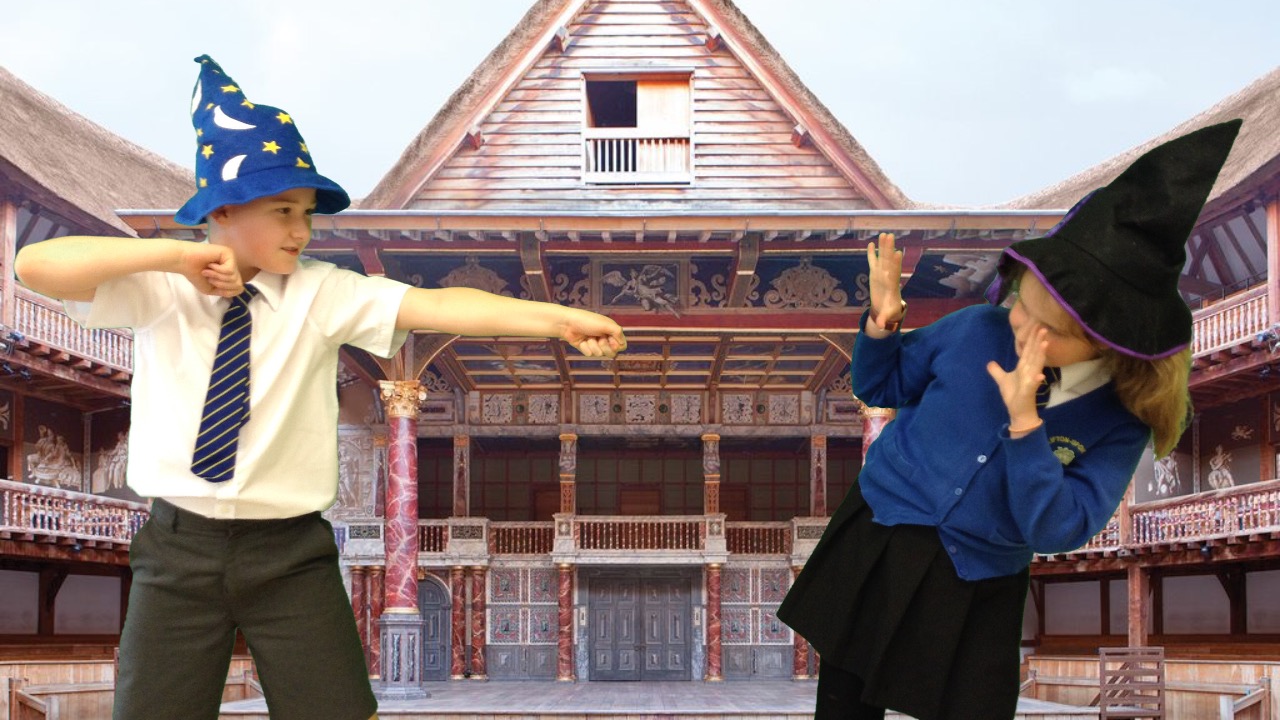 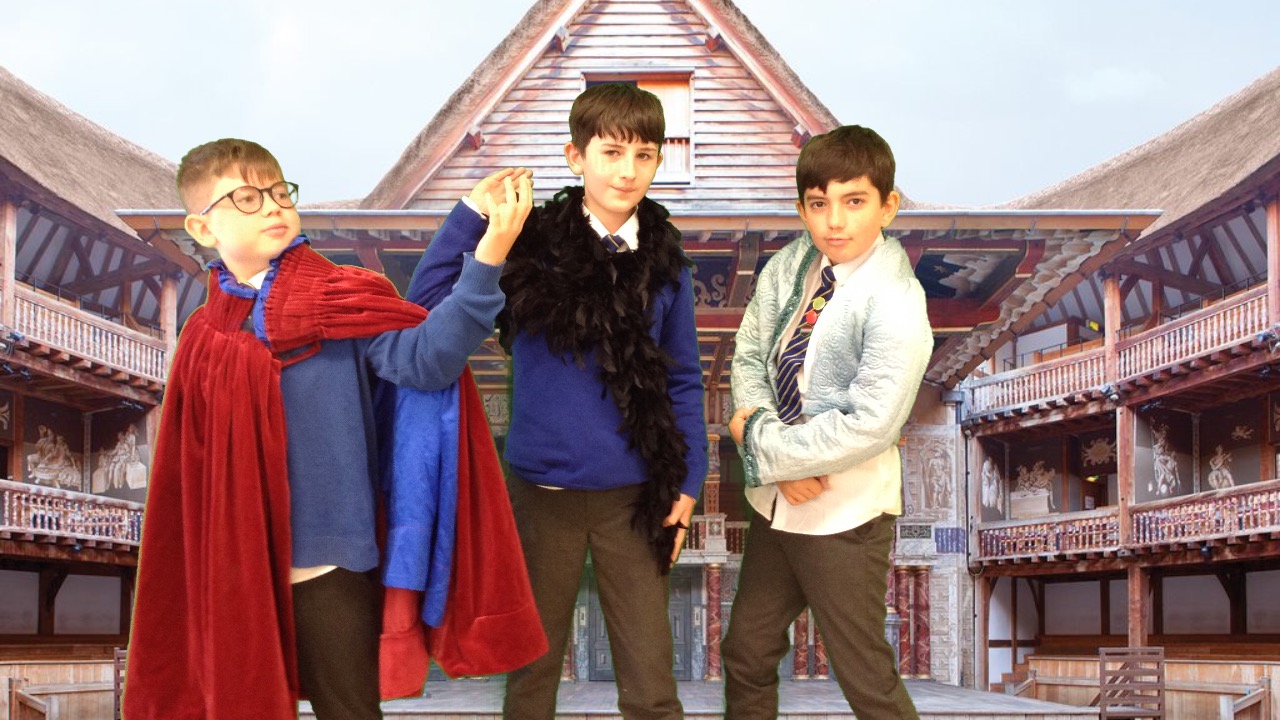 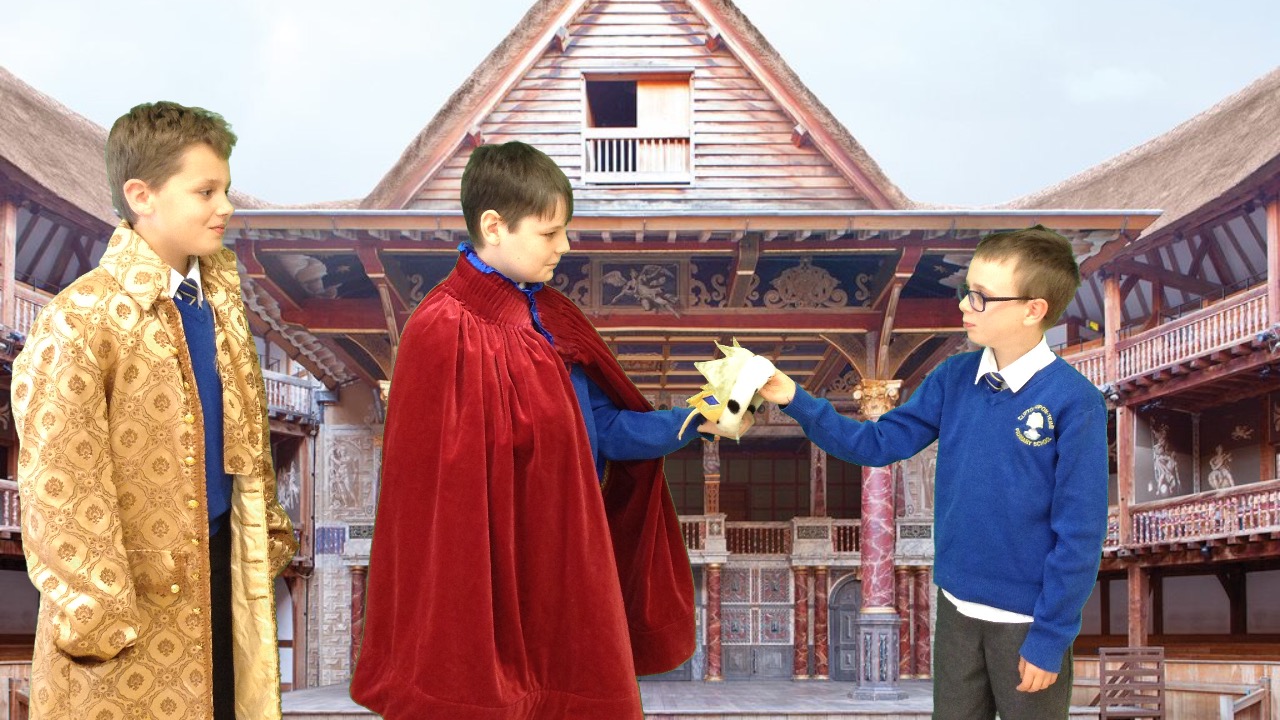 We learnt a lot about Macbeth: he is a good fighter; he's loyal to his king and friends; he's single-minded as well as respected by many. Mattie suggested that this was why he had been 'chosen' by the witches - it would have the most impact if they could make him change his personality.

We used drama to bring this moment to life - to see if we could could show the witches' power and Macbeth's confusion. We also met some other key characters such as King Duncan. Here are some of our acting skills in action! 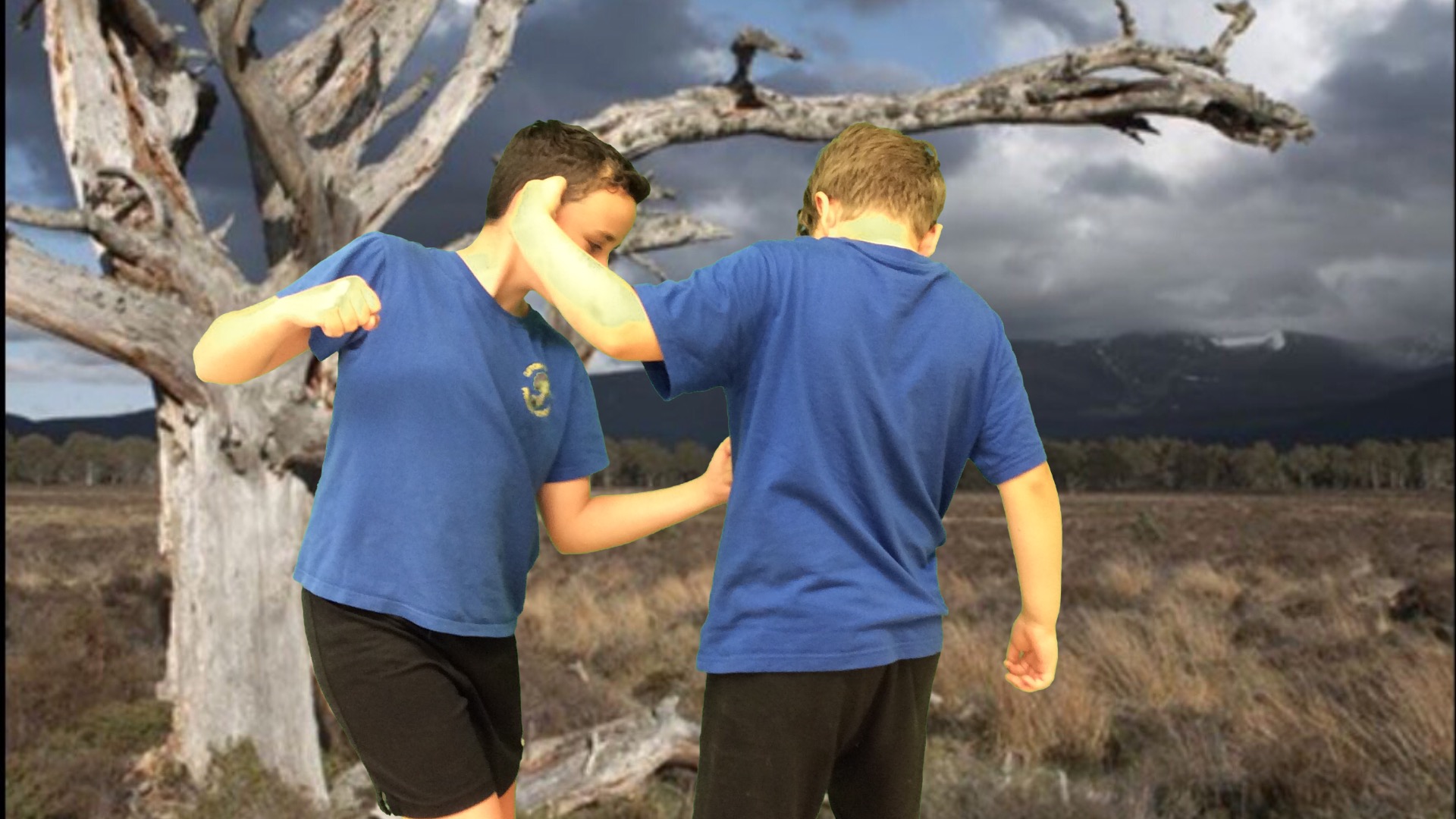 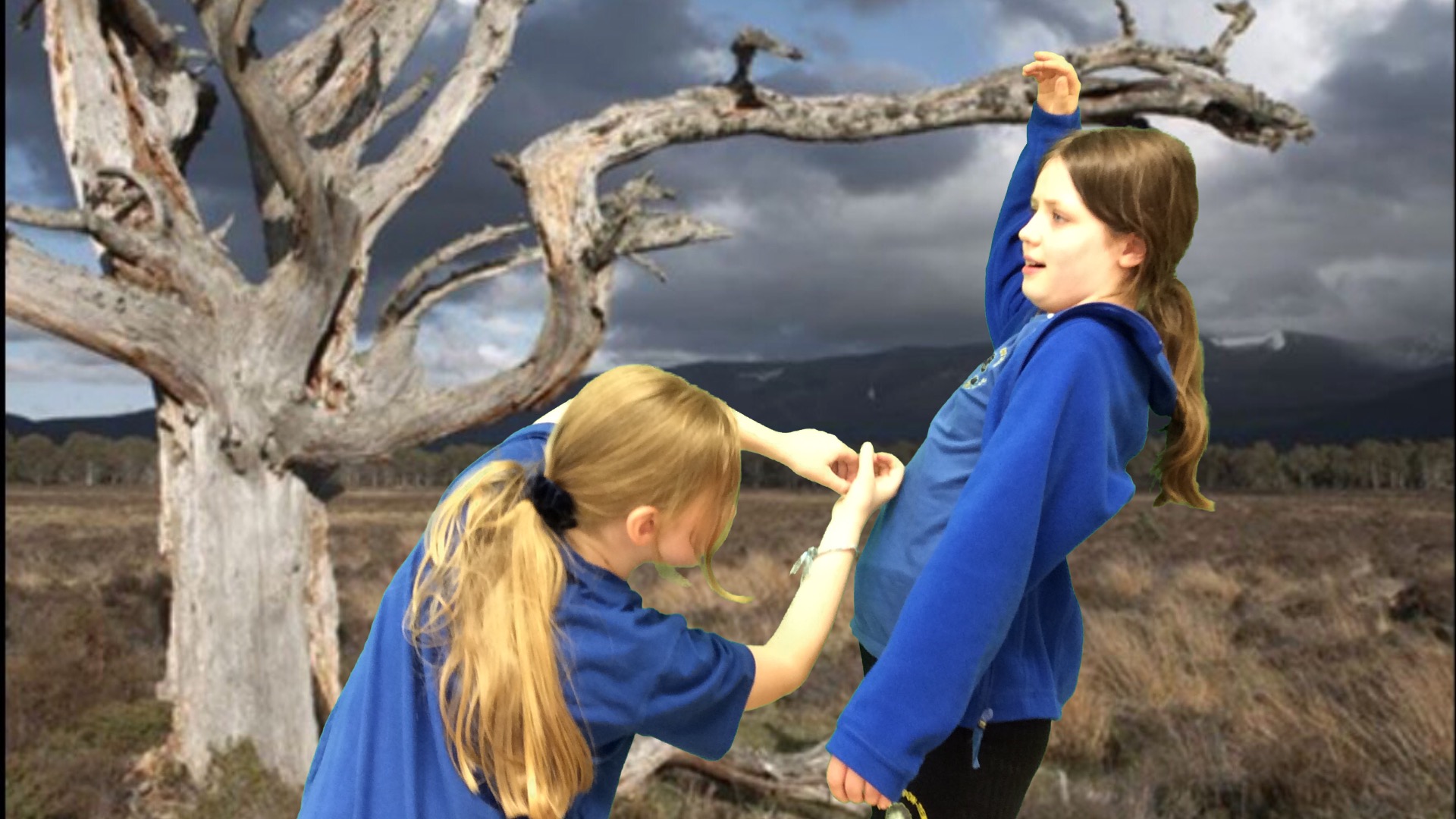 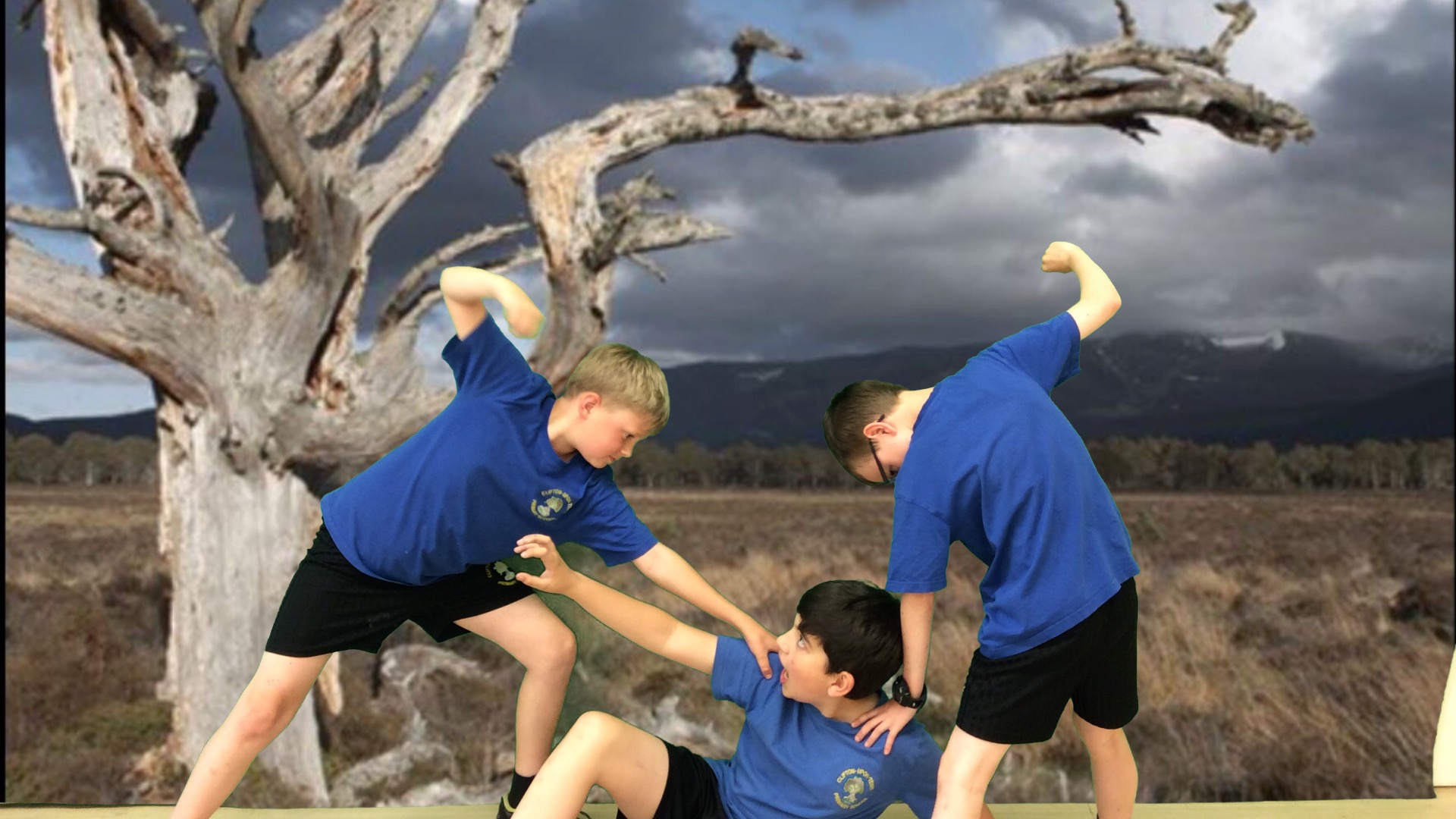 I think that Macbeth is shocked by what the witches tell him - especially about being King of Scotland one day. Part of him likes to hear this but another part of him is worried about what will happen to King Duncan.               Freya Yr 5

This scene is important because the witches are telling Macbeth about his future and he becomes greedy for all the riches he will have.                 Nikoletta Yr 6

Then we watched the same scene from a production at the Globe Theatre to see how it is shown on stage. We looked at how the atmosphere is created and how the actors showed the thoughts and feelings of all the characters.

We can't wait to see what happens next in the story. We are all agreed though that King Duncan's days might be numbered!

Every session, one of us is awarded an Oscar for our acting skills. Here are our Oscar winners this week: 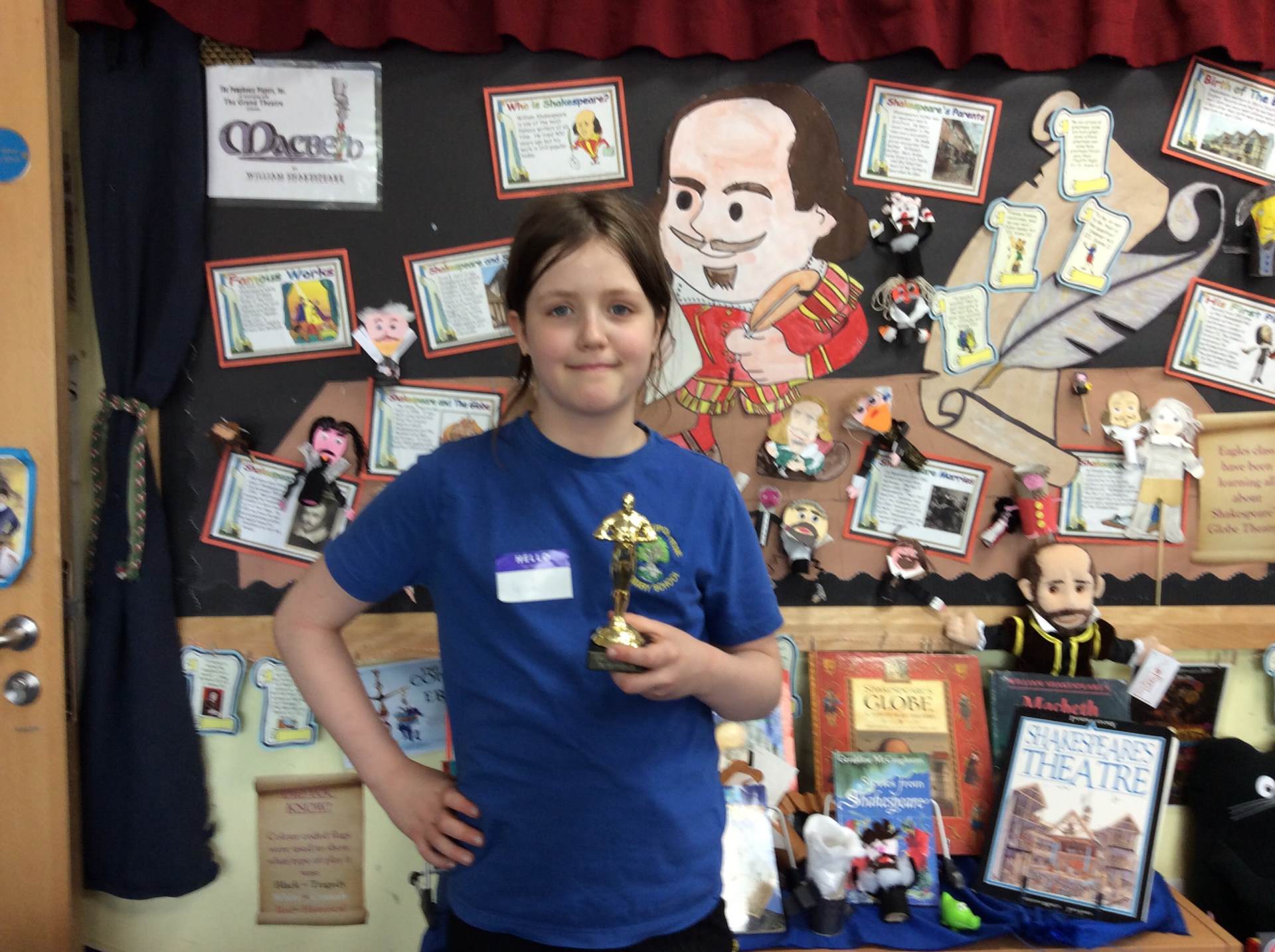 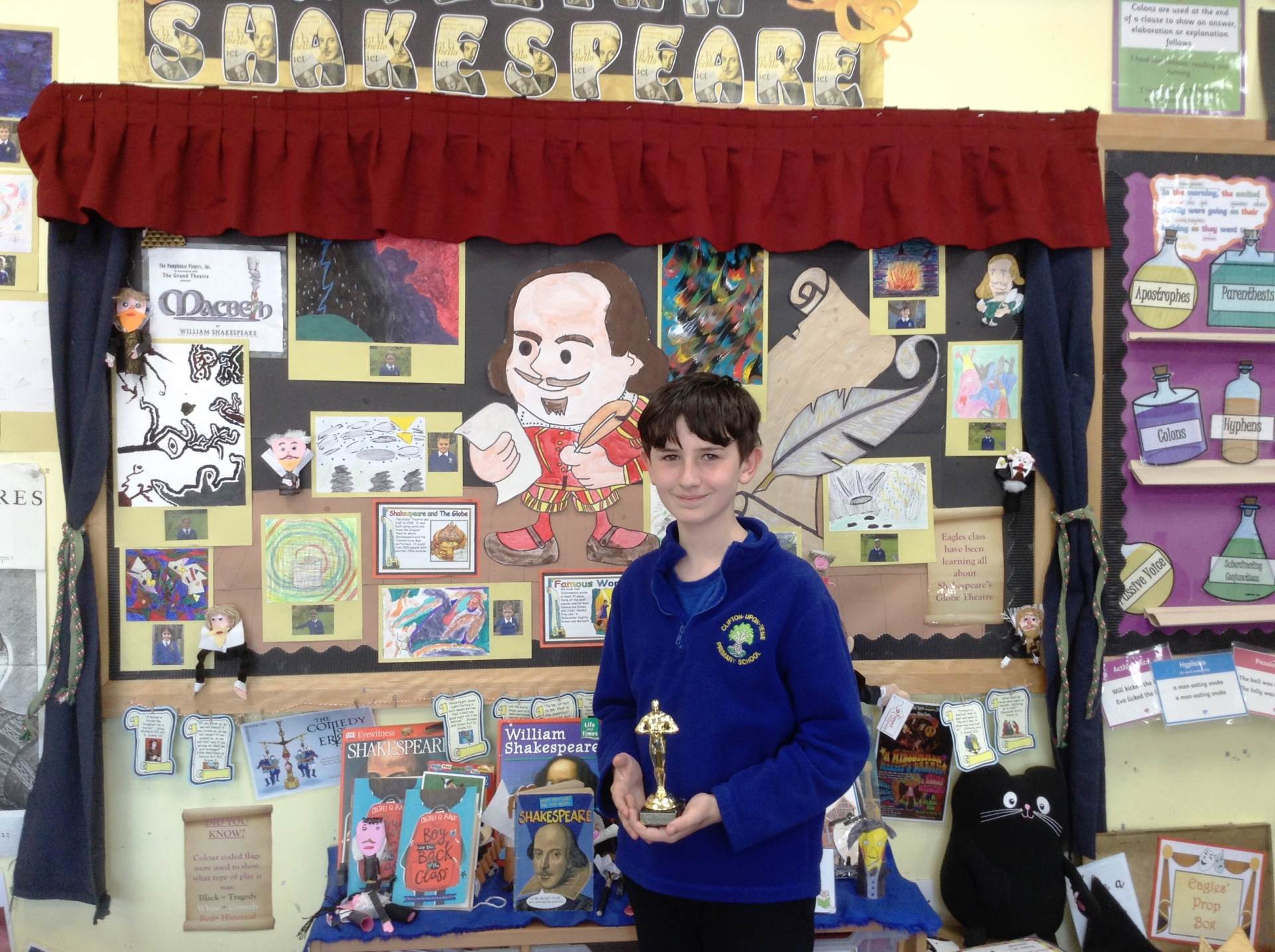 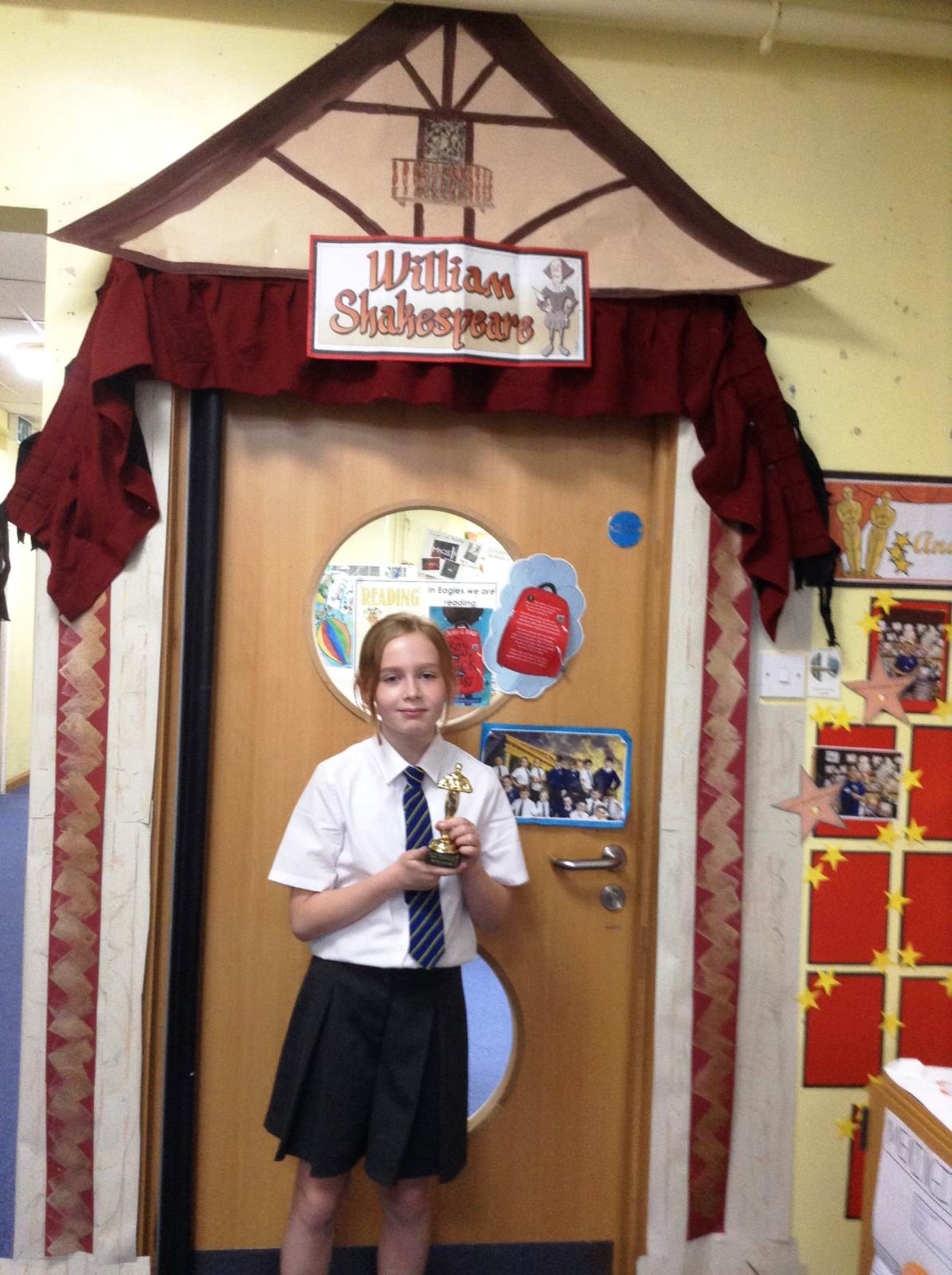 This week we have continued to learn the story of Macbeth and explored the consequences of the meeting of the Macbeth and the witches. We learned that Lady Macbeth, a very ambitious lady, is very excited about the witches' prophecy and so hatches a plan to make Macbeth King.

Lady Macbeth has all of the power in their marriage. It is her plan and Macbeth agrees to go ahead with it even though he doesn't want to.      Billy Yr 6

We looked at Macbeth's confusion and we thought about all the reasons Lady Macbeth would give to persuade him to kill King Duncan. Mrs Hughes then told us that we had to decide what we believed happened on that fateful night and then act out our own scene. Many of us thought that Lady Macbeth would distract the guards to allow Macbeth into the king's bedchamber. One group decided to add in a witch into the scene who was silently watching the events occur. Here are some photos of our scenes: 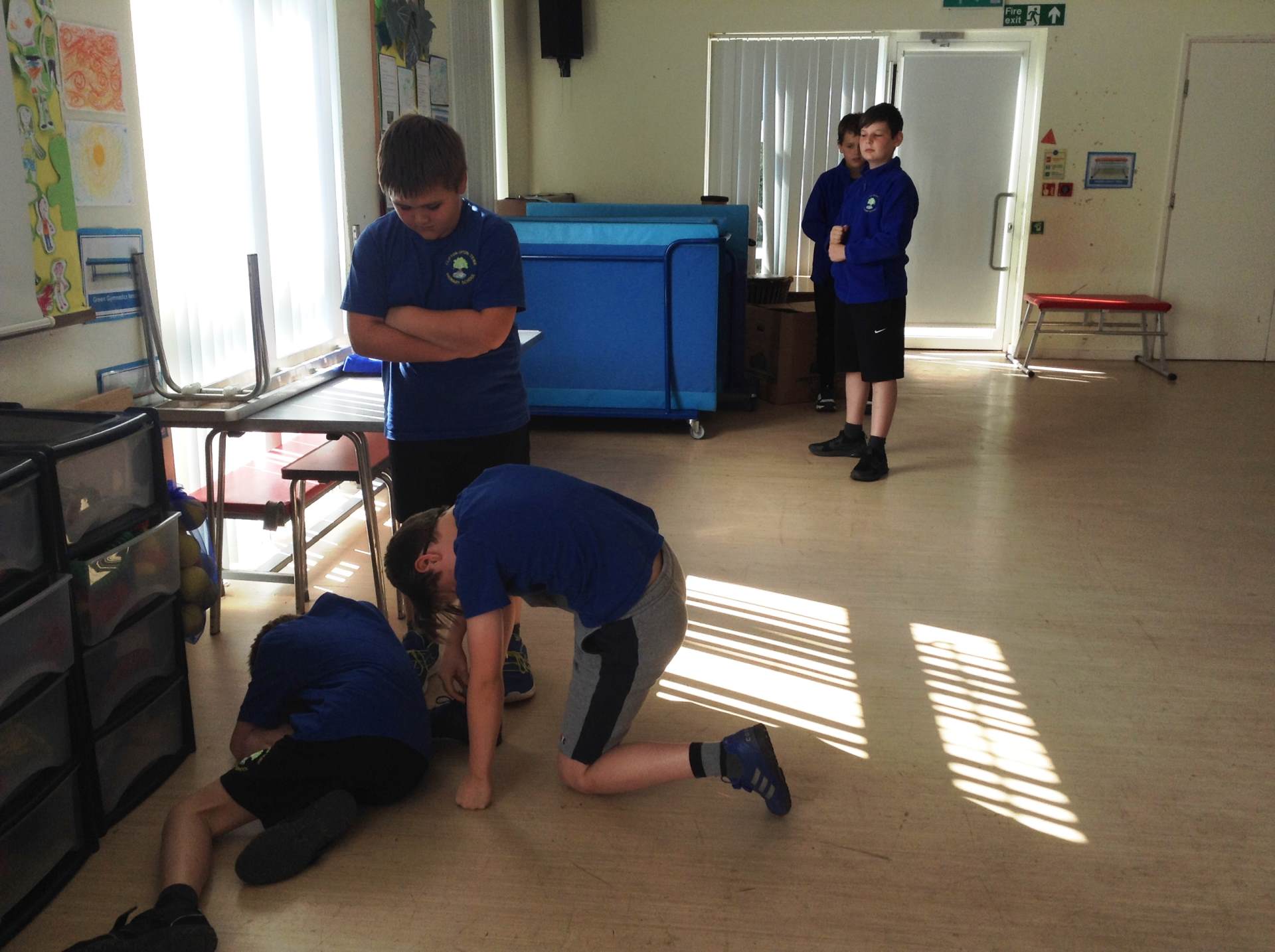 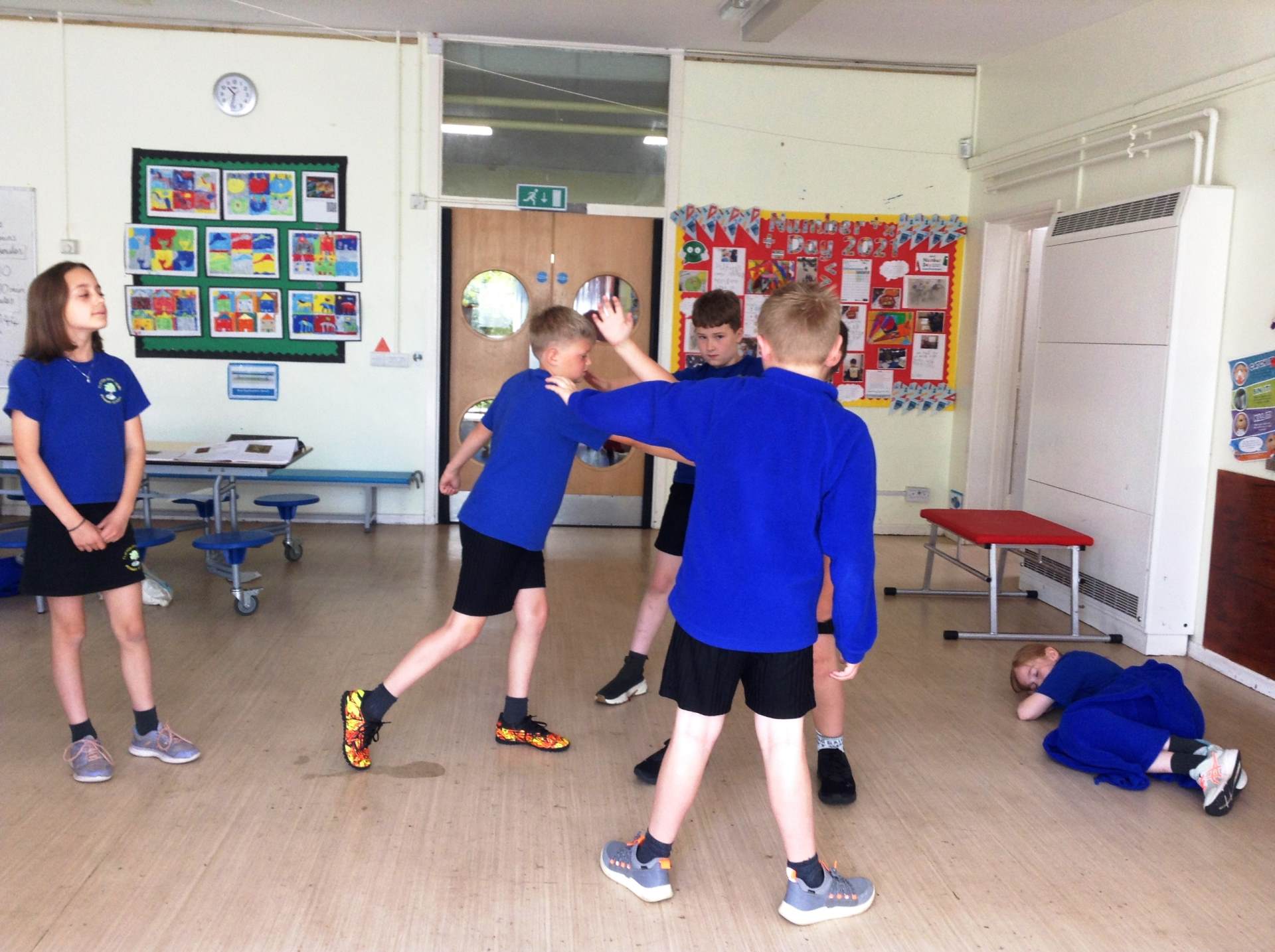 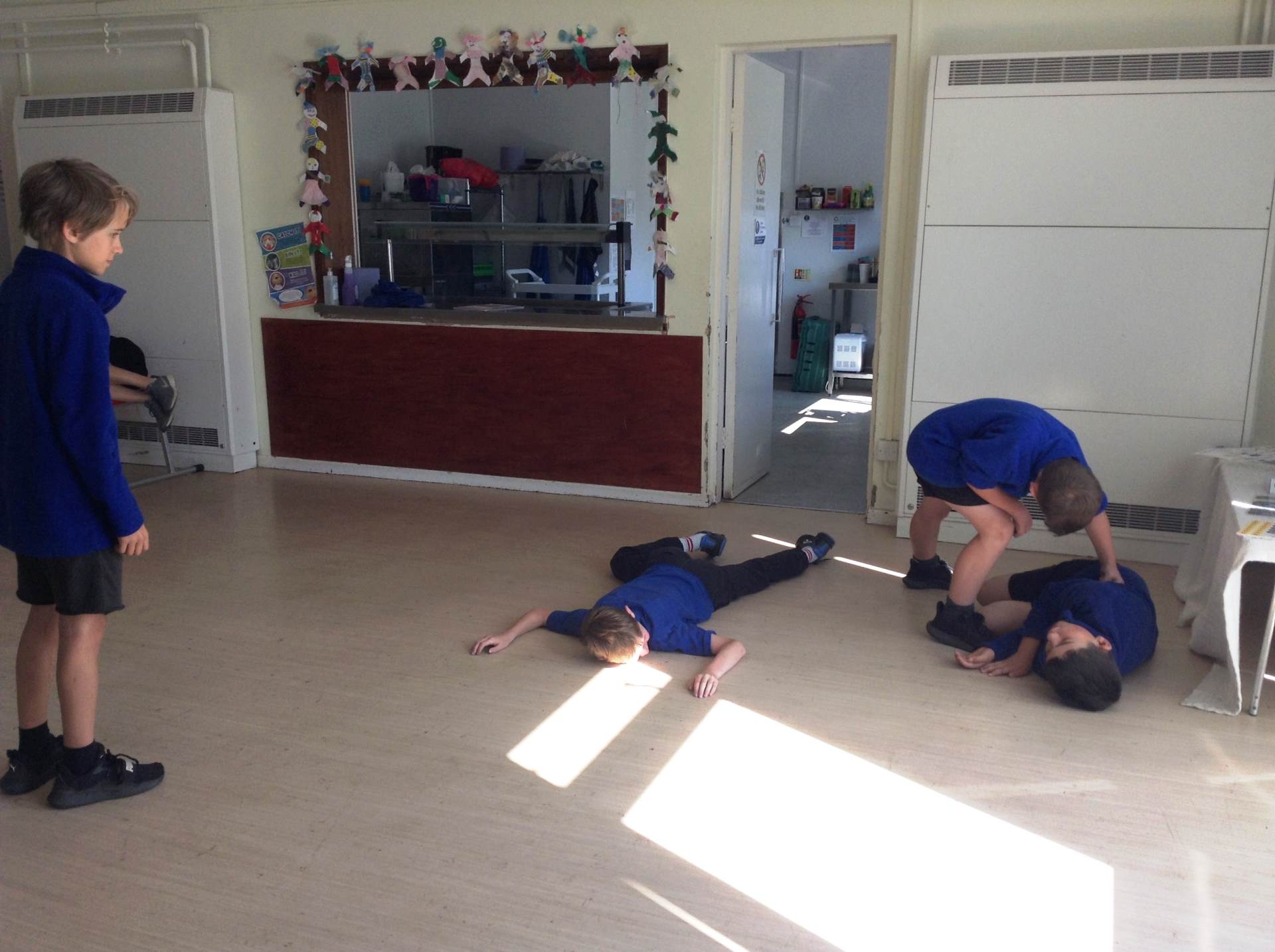 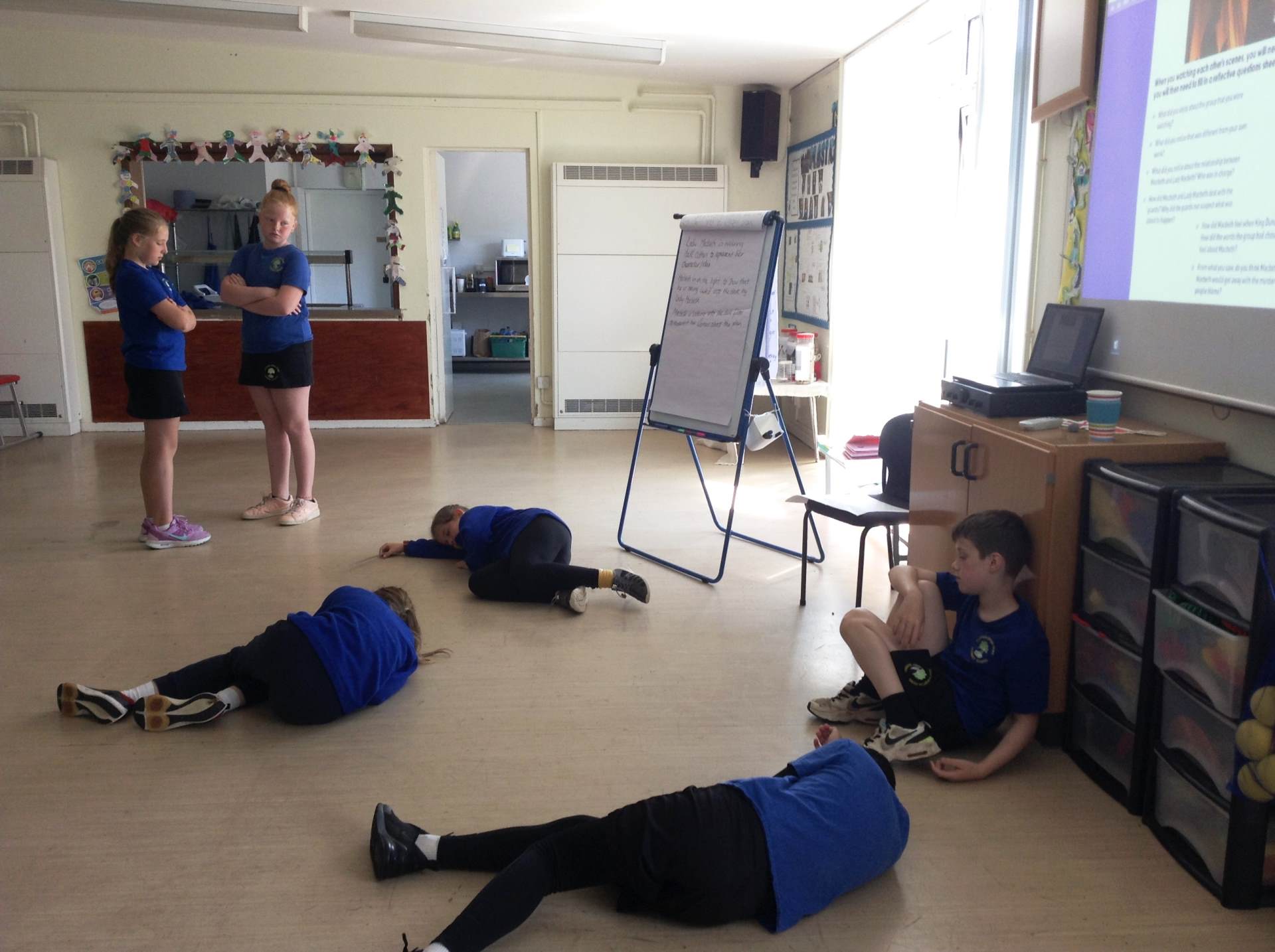 After the night of the murder, Macbeth is crowned King. Even though he has got want he wants, he still fears that the prophecy given to Banquo (that his son will be king) will come true so he orders for them to be killed too. At the coronation banquet, Macbeth finds out that not everything has gone to plan; Banquo is no more but his son Fleance escaped. It is at this banquet that Macbeth 'sees' the ghost of his best friend Banquo. There is a huge argument which we dramatised: 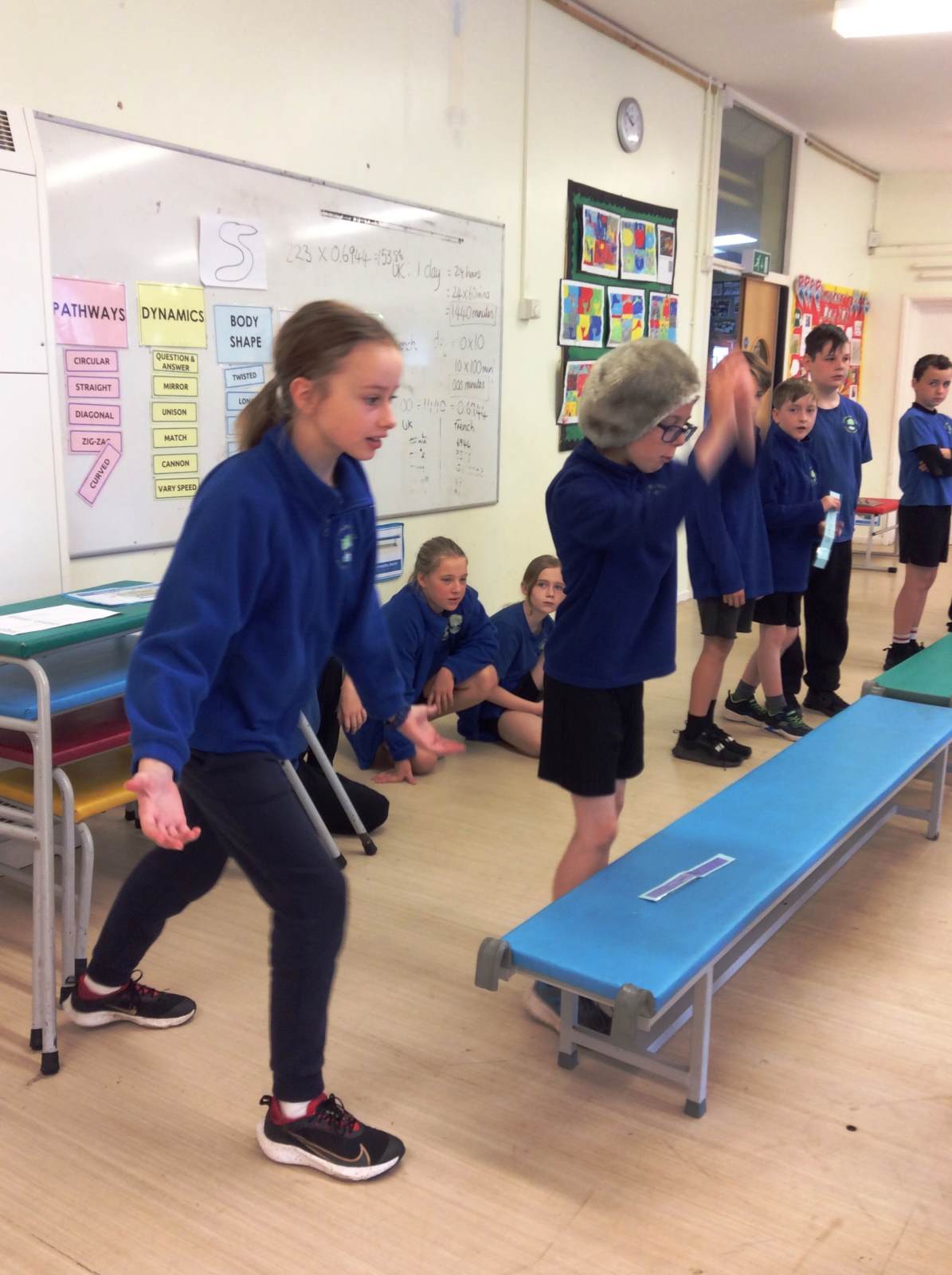 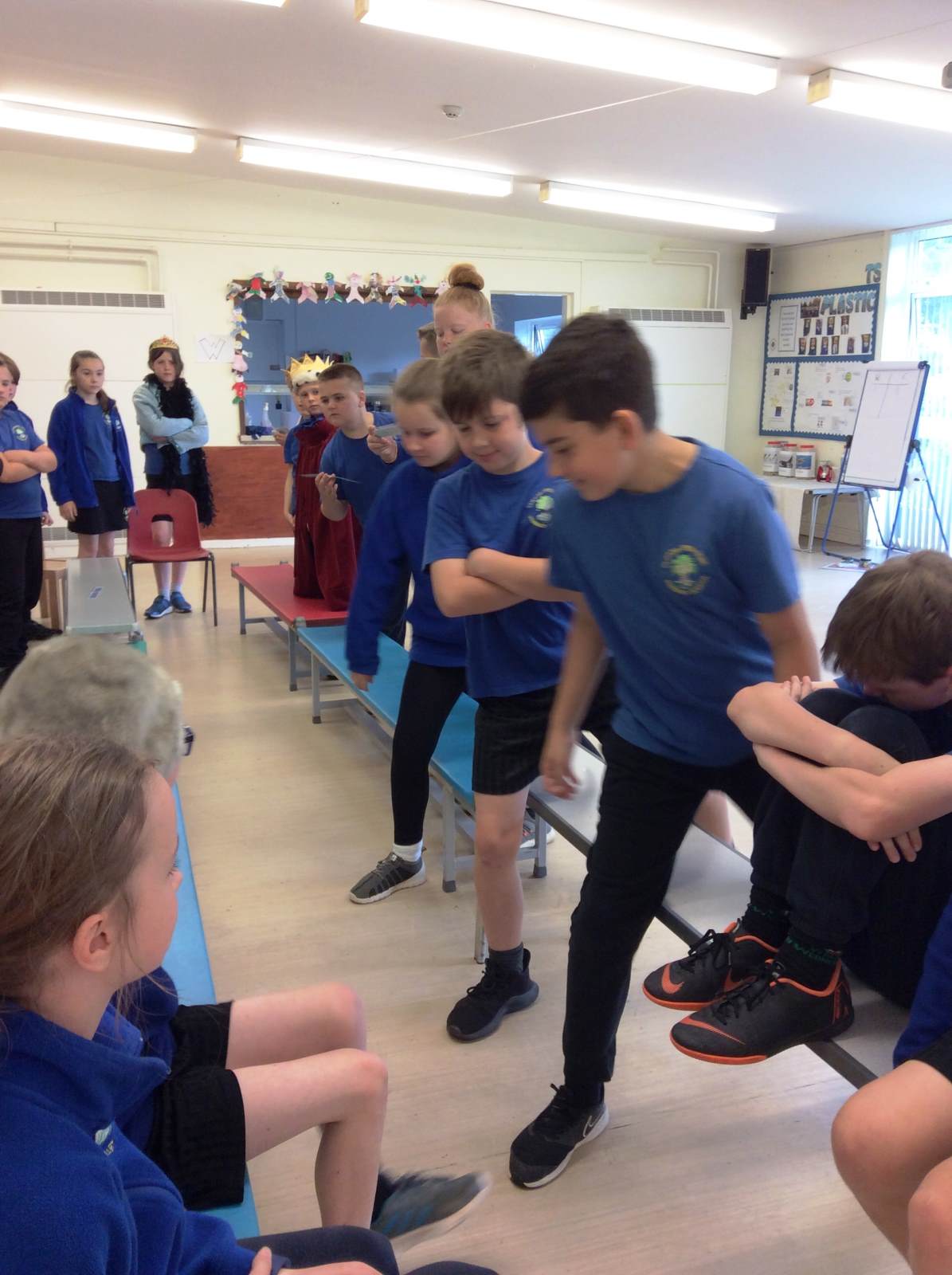 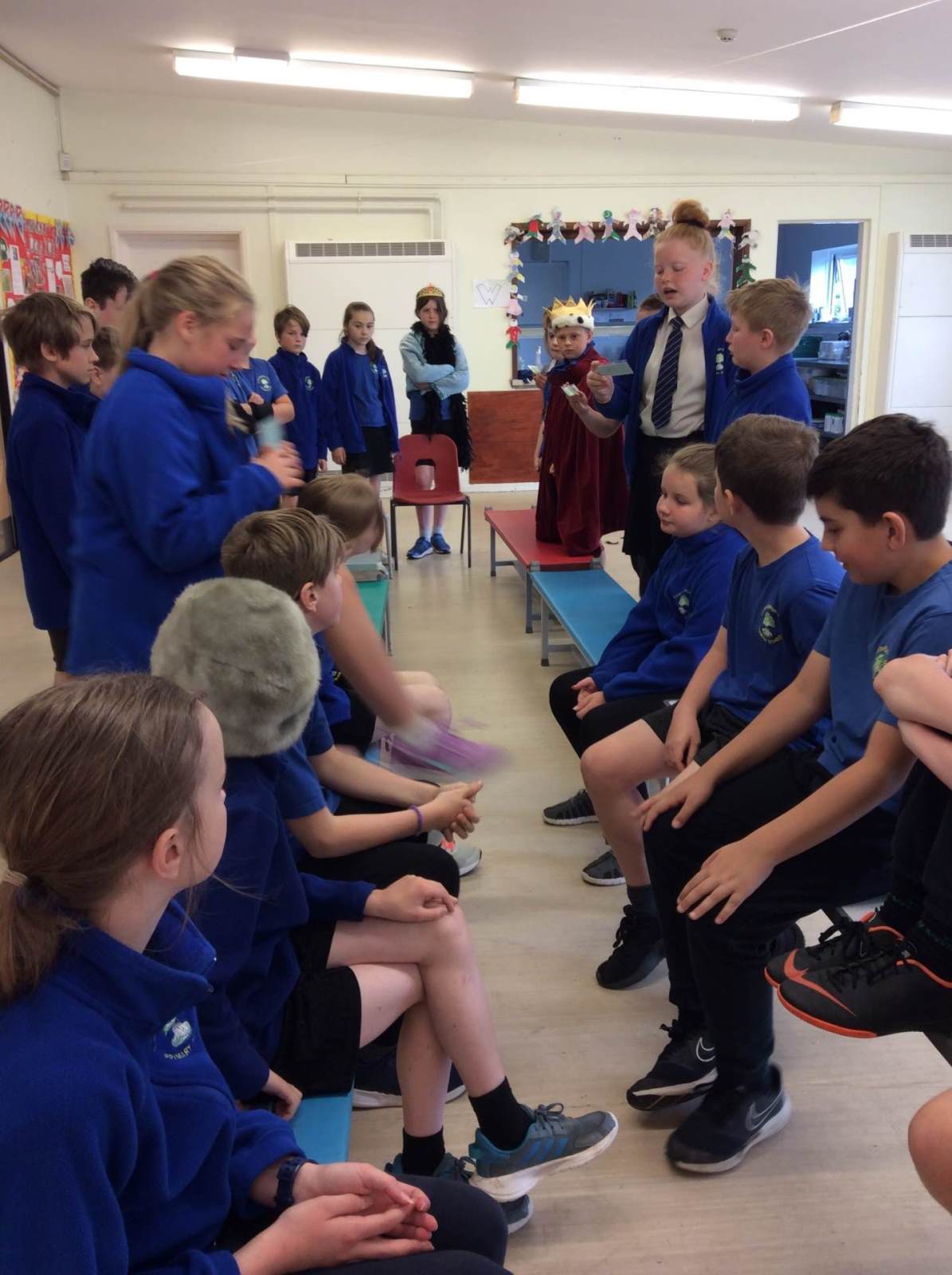 Our Oscar winners this week are: 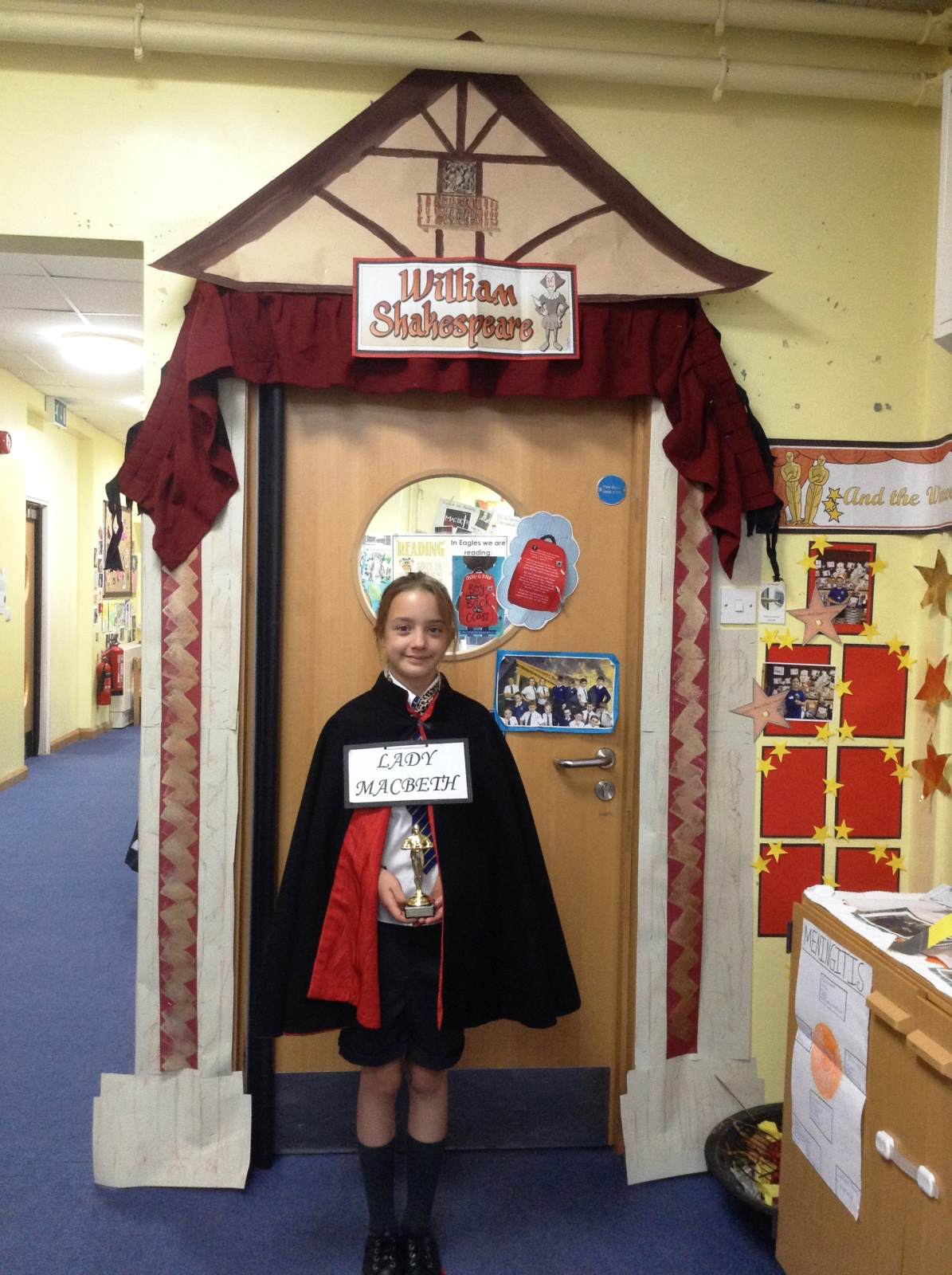 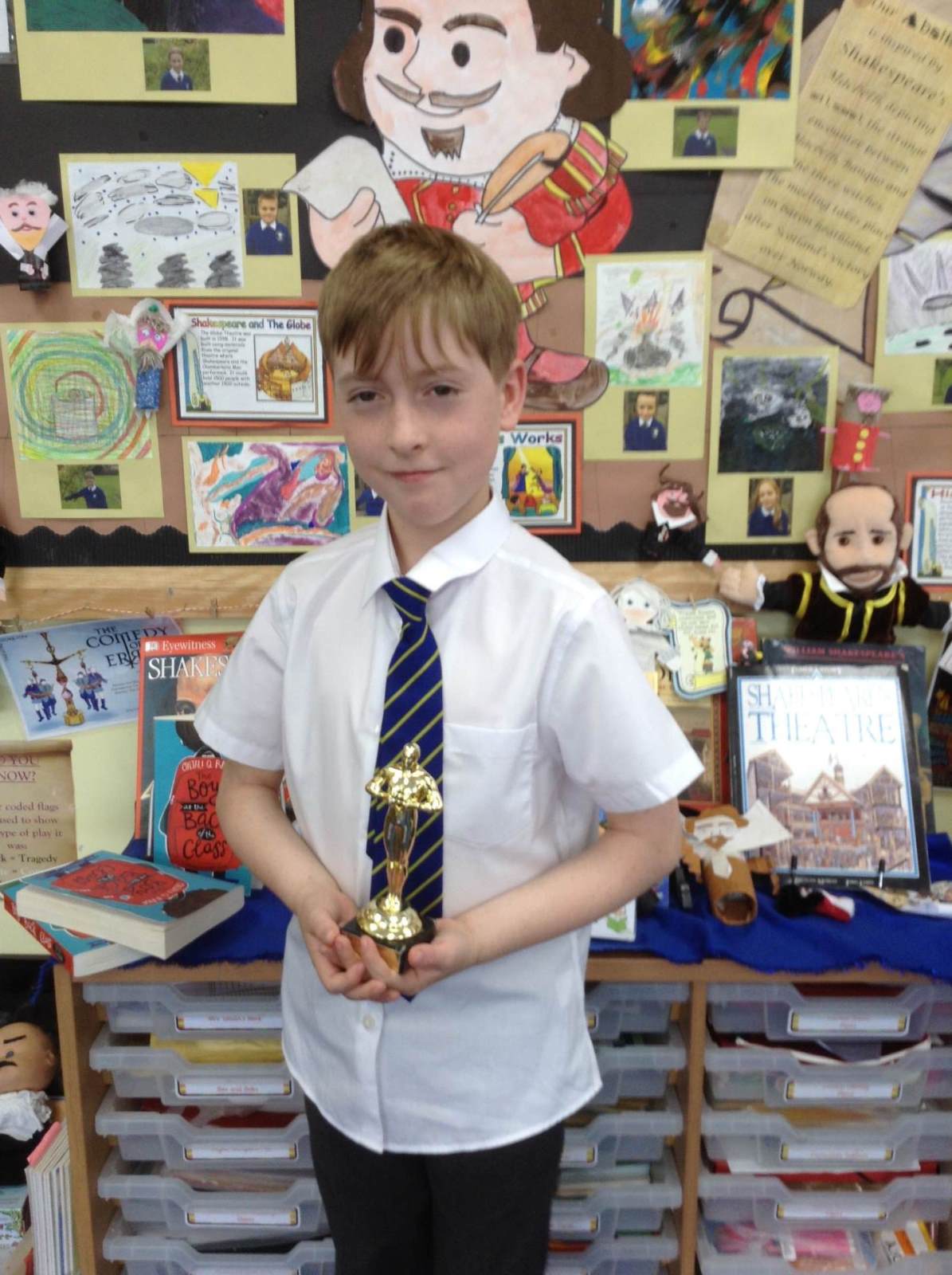